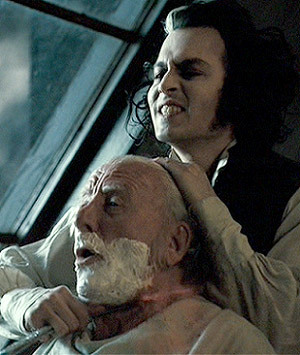 Until relatively recently, hairy apes like you and I had two options when it came to dealing with unkempt hair; either you just hacked it short, or you took an Absurdly Sharp Blade and proceeded to scrape your skin, possibly off. Thus evolved the barber's art; honing, stropping and wielding those wicked-looking straight razors to dispose of unseemly hair without getting blood all over a customer's shirt.

Except that in movieland, however, this is only slightly less dangerous than doing it oneself, as, every so often, that straight razor would end up slicing the customer's throat.

A milder version of this trope involves the customer getting a nonlethal cut, either by accident or intentionally on the barber's part.

See also Cut Himself Shaving and There Will Be Toilet Paper.