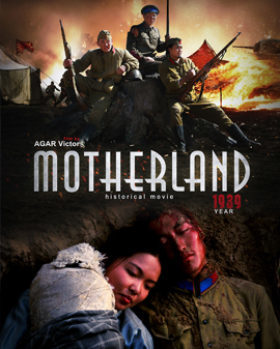 Sainaa is a young man from Ulaanbaatar who comes from money. It's his birthday. His friends Chingis and Amin-Erdene have arranged for an elaborate Paintball Episode party in which they dress up in military fatigues and engage in a game of Capture the Flag against another team toting paintball guns.

Sainaa is late to arrive because he has to extricate himself from under the hot babe sitting on his lap in his apartment, but eventually he joins his buddies, and they have a grand time running around in the wilderness shooting at enemy "soldiers". Finally they spot the other team's headquarters where their flag is kept. They enter the tent...and they're confronted by Japanese soldiers looking at a map.

It seems that Sainaa and his buddies have somehow traveled back in time to 1939, and specifically to the middle of the Battle of Khalkhin Gol

, in which Mongolia and its ally Russia fought against the invading Japanese. The three young men, who were playing in an elaborate war game, find themselves in a terrifyingly real war as the Japanese attack.