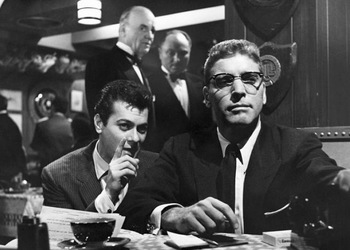 "I'd hate to take a bite out of you. You're a cookie full of arsenic."
"Harvey, I often wish I were deaf and wore a hearing aid. With a simple flick of the switch, I could shut out the greedy murmur of little men."
— J.J. Hunsecker
Advertisement:

Sweet Smell of Success is a very dark 1957 Film Noir directed by Alexander Mackendrick, starring Burt Lancaster and Tony Curtis. It's based on a story by Ernest Lehman, who also wrote the first draft of the screenplay, sharing credit with playwright Clifford Odets, who did the final rewrites. Mackendrick also did some uncredited writing work.

J.J. Hunsecker (Lancaster) is a ruthlessly powerful New York columnist who doesn't like his sister Susan's (Susan Harrison) new boyfriend, jazz guitarist Steve Dallas (Martin Milner). He hires ambitious press agent Sidney Falco (Curtis) to do the dirty work of breaking the two apart, by getting Steve smeared as a Communist in the age when everyone suspected a Red under every bed.

Though the film received poor audience reactions and was a box-office failure when it was first released, it was critically acclaimed and has come to be embraced as an all-time classic today. J.J. Hunsecker, played acerbically and ruthlessly by Burt Lancaster, is number 35 on the American Film Institute's list of the top 50 movie villains of all time

In 2002, the film was adapted into a stage musical by Marvin Hamlisch, Craig Carnelia, and John Guare.