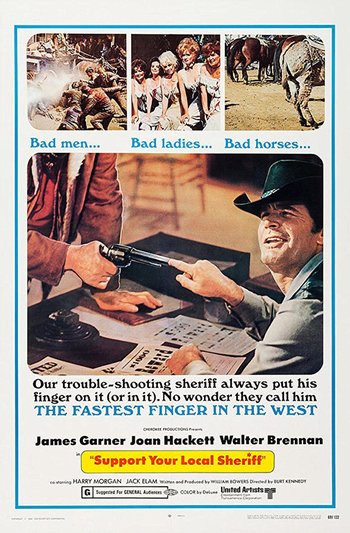 Support Your Local Sheriff is a 1969 Western spoof from United Artists, directed by Burt Kennedy and starring James Garner.

Garner plays the calm and hyper-competent Jason McCullough, who becomes the sheriff of the rowdy boomtown of Calendar, Colorado, mostly because he needs the money. With the questionable help of his scruffy deputy Jake (Jack Elam), he defeats the local robber baron (Walter Brennan), cleans up the town and gets the girl (Joan Hackett), casually subverting most standard western tropes in the process.

Two years later, more or less the same production crew and cast made Support Your Local Gunfighter, which—despite the carry-over and the title—is not a sequel. This time around, Garner is con-artist Latigo Smith, who slips off a train in the jerkwater town of Purgatory and finds himself embroiled in a no-holds-barred battle between two mining concerns to claim the local motherlode of gold. Again with the "help" of Elam's character Jug May, he finds the gold and gets the second girl (Suzanne Pleshette).

The films may or may not be classics, with the editing and continuity being particularly sloppy, but if you're any sort of fan of westerns, you really won't mind too much.

The two films provides examples of: