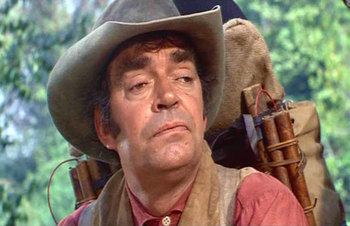 "As an actor, Jack Elam never showed off. In fact, he didn't just 'show' you anything. Instead, he'd let you discover his character yourself. Whether he was playing the good bad guy or the bad good guy, he had the ability to take you along with him for the ride."
— Actor Will Hutchins, who worked with Elam on Sugarfoot from 1959-1961
Advertisement:

William Scott "Jack" Elam (13 November 1920 – 20 October 2003) was an American actor best known for his long career (seventy-three films and forty-one different television series) in westerns. He started playing a lot of villains, but later in his life took on mostly comedic roles, many of which spoofed his earlier appearances as the bad guy. He had a dry way of delivering a sardonic line, but his true strength was his ability to deliver entire pages of dialogue silently, using nothing more than his facial expressions, a skill of which he was one of the great masters.

Elam was born in Miami, Arizona. He earned a degree in Accountancy, and worked as a bookkeeper for Standard Oil before joining the Navy during World War II (he was a supply officer). After the war, he became an independent accountant in Hollywood, California, where one of his clients was studio mogul Samuel Goldwyn. It was Goldwyn who suggested Elam try acting, telling Elam that "you've got the perfect face to play a tough guy." He made his film debut in 1949's She Shoulda Said No!, a now forgotten low-budget exploitation film about marijuana addicts, playing a drug dealer. He'd go on to appear in nearly all of the popular western and crime dramas of the 50s and 60s, including Gunsmoke, The Rifleman, Bonanza, Rawhide, Zorro, The Lone Ranger, and Have Gun – Will Travel, always as the bad guy. His first chance to play a straight-up, non-comedic good guy was his turn as Deputy U.S. Marshal J.D. Smith in The Dakotas, a short-lived western series on ABC.

While he appeared in a relatively light-hearted cameo in High Noon, his was given his first real comedic role in 1969's Support Your Local Sheriff, and the rest, as they say, was history. After his masterful comedic performance in that movie, dramatic and villainous parts were pretty much never offered to him ever again.

Jack Elam was married twice, first to Jean Elam from 1937 to her death in 1961 and then to Margaret Jennison from 1961 until his death in 2003. Elam had two daughters, Jeri Elam and Jacqueline Elam, and a son, Scott Elam. He died of congestive heart failure in 2003, a month before he would turn 83 years old. The epitaph on his headstone reads "I drank scotch and played poker."

Elam's most memorable physical feature, his "lazy" left eye, occurred at age 12 when he was accidentally stabbed in the eye-socket with a pencil by one of his best friends at a Boy Scout meeting in 1928.

Films and television series featuring Jack Elam which have their own pages on this wiki include: