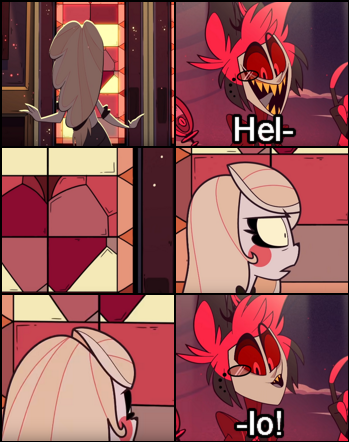 Alastor picks up right where he left off.

When something is paused in the middle of a physical motion (as by magic), it sometimes retains its momentum when it's unpaused and sometimes loses it, usually depending on what would be funny or cool.

Often a result of Time Stands Still. Can overlap with Waking Non Sequitur and may happen with Offscreen Inertia. Can also be invoked with a Time-Freeze Trolling Spree.

After he was convinced to return almost a month later, he began his monologue with...
"As I was saying before I was interrupted... I believe the last thing I said was 'There must be a better way to make a living than this.' Well, I've looked... and there isn't."