Soap Within a Show 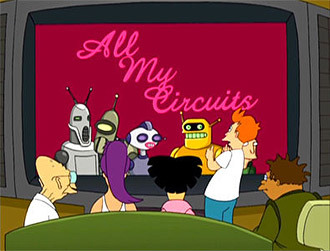 "Yugi, I think I'm pregnant—and you're the father!"
— Tristan (who is male), Yu-Gi-Oh! The Abridged Series
Advertisement:

A Sub-Trope of Show Within a Show. When a Soap Opera is depicted in works from another genre, it is nearly always done as an over-the-top parody of the genre or at least as a quick portrayal of cliched forms of its tropes, including (but by no means limited to):

At least one character in the main cast will be a regular viewer of the show, and likely be forced to explain it.

open/close all folders
Advertising
Anime & Manga
Comic Books
Advertisement:
Eastern European Animation
Fan Fiction
Film (Animated)
Film (Live Action)
Literature
Live-Action TV
Music
"Squire Montgomery!"
"What do you want from me Roger?!"
"I knew it was you all along messing around with my dear Veronica..."
"Wait a minute, you hold it right there, me and that woman love each other"
"-LOVE?! What do you know of love?"
"We were destined to be together, I met her on the beach.."
"Are you out to destroy me?"
"No Roger, that's not what I want to do. I LOVE HER! And we're going to be together."
"Never..."
Newspaper Comics
Radio
Video Games
Web Animation
Webcomics
Western Animation
Other
Feedback

Alternative Title(s): All My Circuits