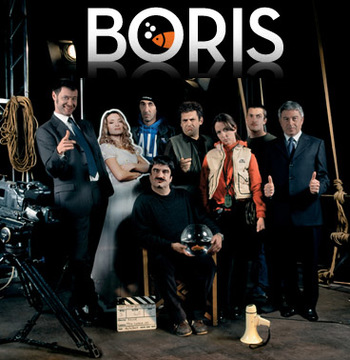 Boris is an Italian comedic TV series produced by FOX. It's a Dilbert-esque satire of the Italian TV series production process revolving around an awful melodrama named ''The Eyes of the Heart 2'' (the sequel of another equally awful series which was cut off after only two episodes, but which the network execs believe was only penalized due to its time slot) and the unlucky, disfunctional troupe of the same — a neurotic director, self-serving and self-centered stars, an incompetent and coke-addicted photography director, a dishonest executive producer, slave interns and more. It parodies much that's wrong with the production process of the mainstream networks: politics, blatantly dishonest product placement, cut-and-paste cliché plots, extreme Executive Meddling and worse, but even when it's not actively making fun of something, the quirky cast manages to keep the funny coming.

Not entirely unlike 30 Rock, but exquisitely Italian.

The show has had three seasons so far, having followed the production of the two seasons of Eyes of the Heart 2 and later of the blatant ripoff of American MedicalDramas Medical Dimension.There is also a movie, concerning the same crew involved in the production of the In-Universe movie La Casta.

Some of the characters involved with the production are:

The series is named after director René's lucky charm goldfish — the last of a long line of such. It's, in what some may see as a fit of Irony, produced by Rupert Murdoch's Fox Italia/Sky.

In February 2021, as the Star section of Disney+ prepares to debut in Italy, a fourth season of the show, which will be released exclusively on said streaming service, was officially announced to be in production.

The Italian side of The Other Wiki

has quite a bit more about it.

open/close all folders
Boris
The Eyes of the Heart
Tropes that happen in the Soap Within a Show and its "sequel" Medical Dimension.