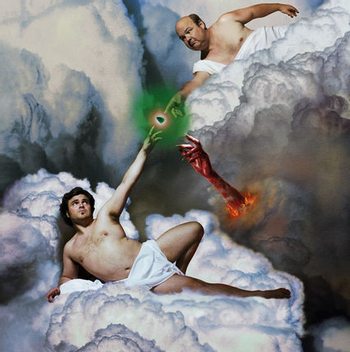 When Michelangelo Buonarroti was given the commission to paint the Sistine Chapel in Rome, he covered the ceiling with frescoes. One of those was Creation of Adam, based on the Book of Genesis: with his right hand outstretched, God floats above Adam to touch the man's fingertip. This famous and iconic image is known not only to art lovers but also to the average television viewer. This makes it fair game for allusions, parody, and all sorts of tropey tomfoolery.

The "creation" pose is often used in Comic Books, Webcomics, political comics and animated cartoons. As with Michelangelo's Pietà sculpture, the recognizable arrangement of two figures is what makes the trope, although Pietà allusions tend to be poignant, while Creation of Adam is used more often in humorous contexts.

The valkyrie Reginleif unites with Adam to form his weapon utilizing a very familiar pose which Michelangelo himself recognizes.

The valkyrie Reginleif unites with Adam to form his weapon utilizing a very familiar pose which Michelangelo himself recognizes.