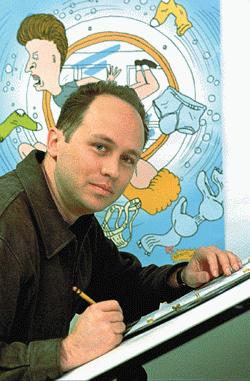 Born in Ecuador but raised in Albuquerque, New Mexico, Judge's career in entertainment came somewhat later than most. Rather than going to art school, he studied physics and worked for a few years as an engineer before deciding to break into comedy by creating shorts for Spike and Mike's Sick and Twisted Animation Festival. Teaching himself how to animate though books, he created a handful of shorts, including Huh?, Office Space and Frog Baseball, which made their rounds on the festival circuit.

Equally as popular with college-aged audiences and even a few high-profile entertainment personalities for its witty, subversive humor as it was controversial among Moral Guardians for the title duo's juvenile, often destructive antics (such as setting things on fire and huffing paint thinner), it was nonetheless a massive success, becoming a seminal piece of 90s pop culture and running for seven seasons, ending with a film, Beavis and Butt-Head Do America, which Judge co-directed. In 2011, it was briefly revived for one season.

Judge's follow-up, which he co-created with Greg Daniels, saw him going in the complete opposite direction with the Slice of Life sitcom King of the Hill for FOX, starring Texan propane (and propane accessories) salesman Hank Hill and his friends and family. The show was famously low-key and lacking in any sort of wacky or outlandish situations, being closer to that of a live-action movie than an animated (or even live-action) TV series with only slight exaggeration for comedy. Despite disinterest from fans of his previous show, heavy competition from other FOX animated shows, the network frequently shifting timeslots, it was a huge hit, running for 12 consecutive years and developing a strong cult following thanks to reruns airing on Adult Swim. Judge has hinted that this, too, may see a revival soon.

Durring Hill's run, Judge made three live-action films, Office Space (self-adapted from his animated shorts), Idiocracy and Extract. The first two were acclaimed flops (the latter even moreso, as Fox got cold feet when they saw just how many real-life corporate brands the film flagrantly skewered and tried to shuffle it off to the DVD rack as fast as they could) and have since developed similar cult followings while the third quickly fizzled out of the public consciousness and seems to have put a damper on his career in live-action features. He would eventually make a return to live-action with the HBO series Silicon Valley, which he co-created with John Altschuler and Dave Krinsky, directing several episodes himself.

Also during this time, he and Don Hertzfeldt curated a touring showcase of independent animated shorts in the same vein as Spike and Mike titled simply The Animation Show.

After Hill ended, Judge created the Spiritual Antithesis series The Goode Family, basically King Of The Hill, but with liberals instead of conservatives. Critical and audience reception was extremely tepid and the show was canceled before its first season could finish airing.

His most recent work is the Cinemax animated series Tales From the Tourbus, loosely based on the Animated Music Video he created for Zac Brown Band's 2012 single "The Wind".

Prior to his careers in film and animation, Judge also had a reasonably successful career as a musician, playing bass for several local bands and briefly toured with blues musician Sam Myers. He later wrote and performed the theme song for Beavis and Butt-Head by himself.

Trope appearing in his work