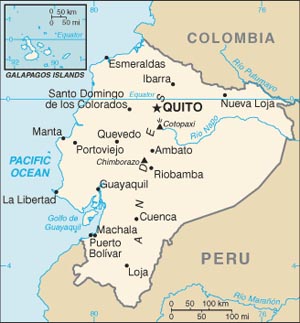 Ecuador is a little (compared to its neighbors, that is; it's actually larger than Britain

) country in South America. As you can probably guess, the Equator goes right through the country. It is one of the two countries in the continent that doesn’t share a border with Brazil, the other one being Chile.

Originally home of many different civilizations, the territory fell to the Incan Empire in the fifteenth century; however, they were eventually conquered by the Spanish empire. Fun fact: the majority of the native peoples in Ecuador were originally from Bolivia, and vice-versa; Tahuatinsuyu had a policy of swapping around native peoples during their rule. During their time in the region, Ecuador was just a little backwater region, with marginal development; however, the first seeds of independence, although fruitless, had its roots here.

In 1822 the country achieved independence and, in a rush of regional fervor, joined the Republic of Gran Colombia (which included Colombia, Panama (at that time part of Colombia) and Venezuela). Some years later they decided the whole unity thing wasn’t that interesting and declared themselves independent once again.

Since then, the country passed through the same things as almost all their neighbors: economical ups-and-downs, military coups, intervention from external powers and border skirmishes. The fact that they were the second producer of oil in the region only helped the facts. In The '80s the country got back the democracy and has been growing since then, but it still has economical problems, especially with the poverty and the growing influence of indigenous people.

In 2010, an attempted coup ensued, the development of which was worthy of a Hollywood script (complete with the president as hostage, shootouts and a daring rescue mission). Some groups, however, see the whole thing as an exaggeration of the President Rafael Correa to help him win popular sympathy and the following elections. Somehow, that makes it even more worthy of Hollywood.

Ecuador has a huge biodiversity, regardless of its size, having a seashore, highlands and a rainforest, all of them containing lots of species, many of them unique to their environments. The Galápagos Islands, famous for giving Darwin his idea for the theory of evolution, belong to the country as well. The Mount Chimborazo (actually an inactive volcano), in the Andes mountain range, is considered the most distant point from the center of the Earth.

In spite of having split from Colombia, the relations between the countries have been nice (there was an impasse a couple of years ago that involved the FARC and Venezuela, but it was resolved peacefully). However, not the same can be said about the relations with Peru. When Ecuador was part of Gran Colombia, it fought a war with Peru between 1828 and 1829 that ended on a stalemate; however, during this Ecuador had the support of all Gran Colombia. Both countries were neutral during most part of World War II, but that didn’t mean they didn’t see war in the meantime; the Ecuadorian-Peruvian War was fought in 1941, with Peru victorious. The disputed territory (where most of the oil was) still gave enough controversy to trigger two wars more: the Paquisha War in 1981 (sometimes called Paquisha Incident, because of the small profile of the conflict) and the Cenepa War in 1995. Since then, both countries have had a civil relationship.

The flag is derived from that of Gran Colombia, with which it was a member. Its yellow, blue and red stripes symbolize gold, the seas, and the blood of its freedom fighters, respectively. It is also differentiated from that of Colombia, however, by its coat-of-arms. The oval shield depicts both Mount Chimborazo

and the Guayas River

, Ecuador's highest mountain and most important river, respectively; sailing the waters is the Guayas, Ecuador's first seaworthy ship; on the sky is a golden sun with a band of zodiac signs from Aries to Cancer, representing the Marcist Revolution

of March-June 1845. Perched above the shield is an Andean Condor

, a symbol of power since pre-Inca times; flanking the sides are four Ecuadorian flags as well as a wreath of laurel and palm leaves of victory and sacrifice, respectively; and below the shield is the fasces of republican dignity.