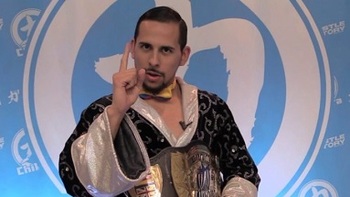 Joe Padilla is an American Professional Wrestler from New York City best known for his work for CHIKARA as Juan Francisco de Coronado. He debuted in 2008 as Johnny Ego and wrestled under that name in various Pennsylvania independents until 2012, when he started the de Coronado gimmick. He kept that name until National Pro Wrestling Day 2019 on February 10, 2019, when he learned that Ecuador had "revoked" his citizenship due to not paying his taxes for ten years.

Along with his reign as CHIKARA Grand Champion, he is a former EPWE Underground Tag Team Champion

as Johnny Ego with RB Banks (better known as Missile Assault Man) as The Young Aces, the fifth and last WiF! Banana Champion

, that is, a title that was represented by an actual banana and the inaugural PWM (Pro Wrestling Magic) Champion

"My name is Juan Francisco de Coronado, and these are my tropes":