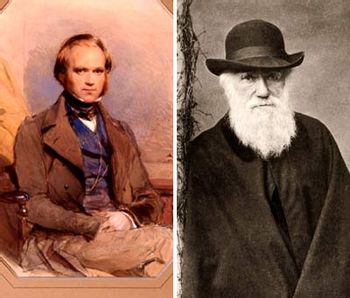 Quite the looker, wasn't he?
"Everything we know about life, Darwin essentially explained."
— Richard Dawkins
Advertisement:

The biggest name in biology, period.

Charles Robert Darwin (12 February 1809 – 19 April 1882) was an English naturalist who first put forward the theory of evolution due to natural selection, stating that the spectrum of differences seen in life on Earth were due to a slow accumulation of change over many generations, selected via environmental pressures. This theory, though it has been significantly fine-tuned since Darwin's day, is the cornerstone of modern biology.

Darwin was not the most interesting of children. By all accounts he was quite lazy, more interested with foxhunting than anything else. He flunked out of medical school because he couldn't stand the sight of blood. He eventually settled down to study theology at Cambridge for becoming a country parson, an intellectually and physically untaxing career that would have provided Darwin with plenty of free time to indulge in his various hobbies. At Christ's College, he became a protege of John S. Henslow, who sparked Darwin's lifelong fascination of biology and geology.

By 1831, Darwin was all set for a life of peace and obscurity when he received an invitation to join a two-year around the world voyage on the HMS Beagle as the captain's companion. No, not like that, or that; at the time, being captain on a small surveying ship like the Beagle was a hard lonely job, as there was an extraordinary amount of work to do and the captain could not fraternize with the enlisted crew. With few officers aboard, a companion was usually hired to provide a source of intelligent conversation). Captain FitzRoy was particularly keen to have a companion, since the previous master of the Beagle had committed suicide; FitzRoy may also have been concerned about the stress of overwork, having seen his half-uncle, the Viscount Castlereagh (Foreign Secretary under The Earl Of Liverpool), commit suicide after cracking under the strain of overwork.

During the trip, Darwin sent back massive amounts of fossils and specimens, and filled journal after journal with the observations (especially those on the Galapagos Islands) of common traits that would eventually lead to his initial theories. Despite all this, the trip was not that pleasant for Darwin, as he spent most of his time on the water violently seasick, stuck in cramped quarters (with a mast stuck in the middle of his room), contracted a debilitating disease, fell out with FitzRoy on several occasions, and was plagued by a chronic inability to get into his hammock. Despite their arguments, Darwin and FitzRoy remained distant friends for years after the voyage, although their relationship finally broke down as FitzRoy descended into clinical depression due to his personal and financial troubles—and partially due to him personally blaming himself for having a hand in giving birth to evolutionism, a theory that he was bitterly opposed as a devout Anglican. When FitzRoy committed suicide, Darwin contributed the equivalent of about £10,000 (in today's money) to assist his wife and orphan daughter. The disease Darwin contracted was possibly Chagas disease

, as he studied the feeding habits of bloodsucking Assassin Bugs by letting them bite him. Whatever the illness was, it plagued him for the rest of his life.

The samples Darwin returned from his voyage with made him an overnight sensation in London's scientific circles and his father gave him a stipend to allow him the freedom to become a full-time gentleman-scientist. It took Darwin about 20 years of work before he would publish his theory of evolution. He had completed several drafts of On the Origin of Species, and made arrangements for it to be published after his death, but was spurred to action when another scientist, Alfred Russel Wallace, having arrived at a very similar idea, wrote to him to ask his advice on it. Darwin forwarded Wallace's paper to Charles Lyell with a letter remarking of the similarities, "he could not have made a better short abstract! Even his terms now stand as heads of my chapters ... he does not say he wishes me to publish [Wallace's paper], but I shall, of course, at once write and offer to send to any journal." Distraught and distracted over the illness of his baby son, Darwin put the problem of assigning credit into the hands of his friends Charles Lyell and Joseph Hooker, who proposed that Wallace's essay be put forward in a joint publication with unpublished work by Darwin, highlighting the fact that Darwin had got there first, and presenting the article to the Linnean Society in May of 1859. When the reaction to the presentation and publication was muted, sparking no great controversy, Darwin proceeded with publication, and before 1859 was out, the first edition of On the Origin of Species was released.

The book was an instant bestseller, and debates over God, creation, science, ethics, the place of man, the meaning in life and other such philosophical concepts began almost immediately, continuing to this day. Darwin never actively joined in with the debate, leaving the fighting to his more pugnacious friends; T.H. Huxley was dubbed "Darwin's Bulldog" for his staunch defence of the theory, leading eventually to Richard Dawkins being dubbed "Darwin's Rottweiler" by some. Interestingly, the initial controversy over the theory had little to do with religion directly, and focused more on the revelation by Darwin that the green and pleasant scenes so familiar to the English country gentleman of the time were, in fact, vast battlefields where species and individuals were locked into an unending cycle of conflict; if this seems surprising to you, consider that the issue of the evolution of mankind as a species was barely touched on in Origin, that subject being tackled instead by a later volume, The Descent of Man (Not to be confused with The Ascent of Man, which evolved its title from that work). His name has also been associated with Social Darwinism, which is the application of his ideas to nations and the human race, notably advocated by his cousin, Sir Francis Galtonnote "I postulate that the chances of two specific individuals having the same fingerprint is very teeny-tiny! ... I also invented Eugenics!" "Oh, God, get him out of here!"

, as well as Herbert Spencer.

Darwin would be absolutely disgusted by these Social Darwinists misinterpreting his work for use in Realpolitik, and was disgusted and horrified by the slave trade, as had been his grandfather Erasmus Darwin and wife Emma's grandfather, Josiah Wedgewood, both prominent abolitionistsnote In the original editions (1839 and 1845) of his Journal of Researches he treats quite casually most hardships of the expedition. There is just one thing, over 5 years exposed in more than 500 pages, which made him loose his cool head altogether: slavery witnessed in South America, in Chapters I, II and XXI. One can almost feel he wrote them gnashing his teeth in rage. He considered this interpretation impractical, and disagreed with it on scientific grounds, as well as moral ones. Although he analyzed the supposed negative effect that the "weak" caused by "propagating their kind," he cautioned that to allow hard reason to override sympathy would have an even worse effect: "A deterioration in the noblest part of our nature." At any rate, the idea that certain types of people were "superior" to other types wasn't exactly a new idea (remember that whole slavery thing?). Darwin's studies just gave some people the chance to claim that biology supported such views. In any case, Darwin's idea of 'survival of the fittest' referred to individuals and species fitting into a niche in nature, not comparing the attributes of one species to another. One could say that the cat is 'superior' or 'fitter' than the mouse, but the mouse still has a niche into which it fits very nicely and continues to thrive.

His ideas did not inspire either the Soviet Union or the Nazis. Well, they did and they didn't. On the one hand, the Nazis banned his work (On The Origin Of Species was one of the first books to be burned by them), and the Soviet denounced it as "bourgeois science", instead promoting a neo-Lamarckian view of evolution, which hampered their biological research for decades, until they had to abandon it (they also attempted something similar with Albert Einstein's theories, but thanks in large part to Vladimir Fock, it didn't stick). On the other hand, it is true that the Nazis were seriously influenced by Social Darwinism, particularly German racist Social Darwinism—which, as we've noted already, twisted Darwin's work in a matter that utterly disgusted him. On the other end of the spectrum, Karl Marx saw a resonance between Darwin's ideas and his own, which saw the impersonal forces of Nature (in Darwin's case)/History (in Marx's case) driving change; Marx moreover pulled that idea over into believing that the proletariat was best fit to the new industrial world, and would therefore be the "champions" of the social "evolutionary race." Friedrich Engels, in his eulogy for Marx, explicitly called Marx the Darwin of the social sciences, for bringing materialism and data into what had previously been a realm of pure speculation. However, Marx misunderstood Darwin only a bit less than the German racists did—had he been a true Darwinist, he would have realized that evolution doesn't have a "goal" or "winners," only survivors, and would've been more circumspect about predicting the future.

He and Emma were first cousins - Darwin felt guilty about this because he believed it might have led to their children being weak, one daughter dying tragically of illness while very young. He is usually seen in fiction as an old man with a thick beard, but he wasn't always like that. The picture at the top of the page shows he was rather cute in his younger days. Darwin was also an expert in pigeon breeding, orchids, earthworms and (of all things) sea barnacles.note The compartmentalisation of sexual function within Barnacles led to Darwin speculating on the evolution of sexual dimorphism, i.e. how Male and Female came to be seperate entities in most forms of life.

It is held by certain (ill-informed) persons that he recanted his theory on his death bed, in the presence of a woman named Lady Hope. This is wrong on two distinct levels: strictly on a factual basis, the woman calling herself "Lady Hope" was not present during his last illness, or indeed any of his illnesses, according to the testimony of Darwin's daughter. Secondly, even if Darwin did recant (which he showed no sign of doing) to Lady Hope (who he may never have actually met), science strives to operate on evidence rather than personal opinion. The evidence gathered in the century and a half since Origin Of Species has so far failed to produce any indication that the basic premises of Darwin's theory are wrong.