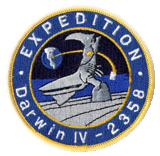 Expedition — Being an Account in Words and Artwork of the 2358 A.D. Voyage to Darwin IV by Wayne Barlowe in 1990, is a illustrated Speculative Documentary about an expedition to the fictitious planet "Darwin IV" and its life forms. It was adapted into a TV movie called Alien Planet

The author's website for the book can be found here

, and the Discovery Channel's website for the movie is here