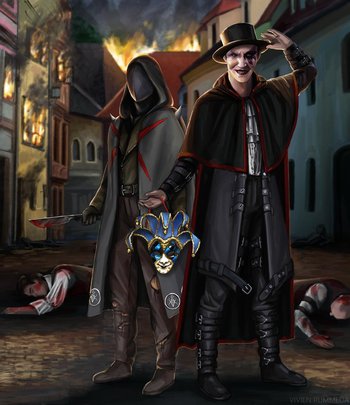 They don't get much worse than Lucia (L) and Nyarlathotep (R).
Image by shamiana

. Used with permission.
"Give yourself to me, Monica. Fulfill your daddy's desires at last. You are marked as mine, as so many others are. In Italy, a man is plying a woman with drink to lay with her, and that is mine. In a prison in Russia, a man is forced by another prisoner. I am there for both of them again. I am there for every ravishment. It is mine, as you are mine! I am The Defiler, rapist of billions! I have taken worlds entire unto myself, savaged them until they begged with one voice for more! I have devoured and devoured until nothing remained save my own carnality. Join the revels you are meant to!"
—Y'golonac the Defiler, to Monica Duvalier, Only A Lonely Heart
Advertisement:

Hardestadt Delac, Eliza Cortly, and their allies have faced countless foes. Here are the worst.

When applicable, entries in each group are listed in chronological order.

The Kindness of Devils