Literature / The Wolves of War 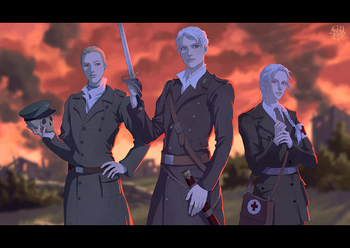 The Wolves of War is a supernatural horror story by Scraggle and Lightysnake, and officially the third entry in the crossover between The Never Mythos and The Kindness of Devils, the Lonely Dreams Cycle. It can be read here

Almost 170 years after Blatna, Eliza and Hardestadt have built a life as one. The growing fires of World War II ensure they cannot remain content for long, and when Adam returns to them with news of a horrific conspiracy in the heart of Germany, the two must travel to the heart of Nazi territory amidst the burgeoning war, to stop a dark plot that threatens to envelop the world.