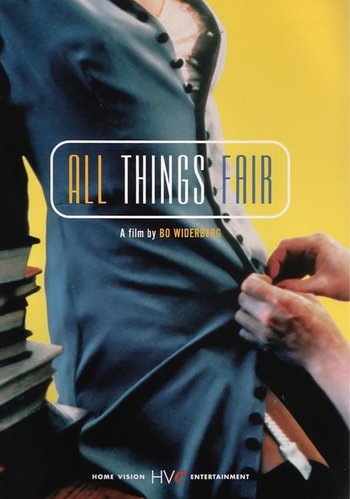 All Things Fair is a 1995 film from Sweden directed by Bo Widerberg.

Sweden, 1943. The Swedes are clinging to a precarious neutrality in World War II, surrounded on all sides by Germany and countries occupied by/allied to Germany. Stig is a teenaged boy in high school in Malmo. He and all the other boys in his class (classes are segregated by gender) are little teenaged horndogs, balls of hormones that pass the days measuring the depth of their pubic hair (with rulers!) and wondering how many times a man moves his penis inside a woman during sex. (One boy's estimate of 800 times is slightly high.)

Into this cloud of testosterone comes Viola, an attractive 37-year-old schoolteacher. Viola takes a special interest in Stig, who, besides being generally decent and honorable, is a handsome young man, not as awkward as his gawky classmates. Soon Viola takes too much of an interest in Stig. After one impulsive kiss from Stig to Viola in a stairwell, they plunge almost immediately into a torrid affair, with Viola instructing Stig in the ways of sex while enjoying his teenaged virility. The situation becomes more complicated when Stig meets Viola's husband, a perpetually drunken lingerie salesman named Frank. Frank and Stig form an unusual friendship, which leads to major changes in Stig's affair with Frank's wife.