Film / After the Wedding 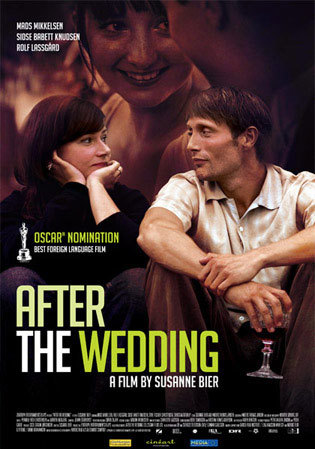 After the Wedding is a 2006 film from Denmark directed by Susanne Bier, written by Anders Thomas Jensen.

Jacob Petersen (Mads Mikkelsen) is a Danish aid worker at an orphanage in India. His orphanage is a tiny oasis of aid and help in a city (the exact location isn't specified) teeming with homeless, starving children. Jacob, who is very dedicated to his work, has taken a special interest in an 8-year-old orphan boy named Pramod.

However, the orphanage is not doing well at all, and may soon have to close for lack of funds. So the director of the orphanage is very happy to receive an offer of funding from Danish billionaire Jørgen Hansson. Jacob travels back home to Denmark to receive the money, and is invited by Jørgen to his daughter Anna's wedding, which is in only a couple of days. Jacob shows up at the wedding and is startled to find that Anna's mother Helene (Sidse Babett Knudsen—Borgen, Westworld) is his old girlfriend from 20 years ago...and Anna is 20 years old.

Was nominated for Best Foreign Language Film (though it lost to The Lives of Others), and was remade in 2019, with Julianne Moore, Michelle Williams, and Billy Crudup.