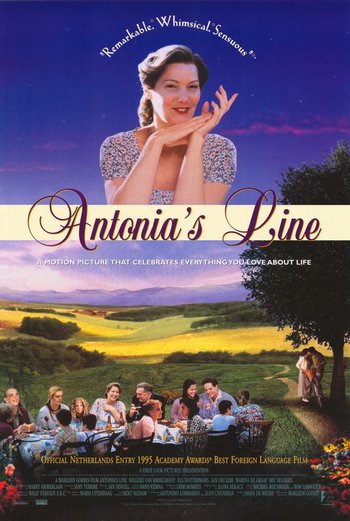 Antonia's Line is a 1995 film from The Netherlands. It was written and directed by Marleen Gorris.

Antonia is a thirty-ish woman who was living abroad, but comes back to her old hometown in The Netherlands in the immediate aftermath of World War II. She and her daughter Danielle settle down and work the family farm. Farmer Bas, Antonia's widower neighbor, approaches her with an offer of marriage, which Antonia spurns, but they become friends regardless.

As the years go by in the village Antonia builds a large extended family, including the Bas family as well as "Crooked Finger", the blacksmith who never leaves his house, and Deedee, the mentally challenged sister of Antonia's monstrous neighbor Pitte. Danielle, who is a lesbian, sets out to have a child without getting married. Decades pass, with Antonia becoming a benevolent leader of her harmonious little village.