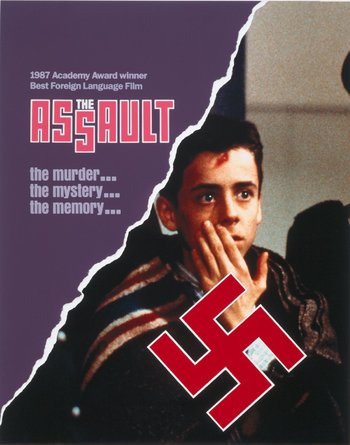 The Assault (De aanslag) is a 1986 film from The Netherlands, directed by Fons Rademakers and based on the novel of the same name by Harry Mulisch.

The film opens in January 1945, in Haarlem, The Netherlands. Holland, still occupied by the Germans, is suffering through the "Hunger Winter

" in the closing days of World War II. The placid family life of the Steenwijk family is destroyed in an instant when a Dutch Nazi collaborator, Ploeg, is shot down in the street. In fact Ploeg is killed in front of their neighbors' house, but the neighbors drag the corpse over in front of the Steenwijk house. German police swarm onto the street. Mr. and Mrs. Steenwijk are arrested and never seen again; they were taken and shot by the Germans as reprisals. Older son Peter Steenwijk disappears; he is later revealed to have been shot minutes later in the neighbors' house.

Left alone is 12-year-old Anton, the younger son. Anton is arrested but in an uncharacteristic show of mercy, the Germans release him into the custody of his uncle. Liberation comes four months later. Anton goes to school and grows to adulthood (adult Anton is played by Derek de Lint). Years pass by as Anton goes to medical school and becomes an anesthesiologist. The Cold War unfolds as Anton gets married, has a daughter, gets divorced, gets married again and has a son. Decades roll by, forty years as Anton ages from a pre-teen into a prosperous man in his early 50s...but still he is haunted by the past and the memory of the night his family was destroyed.