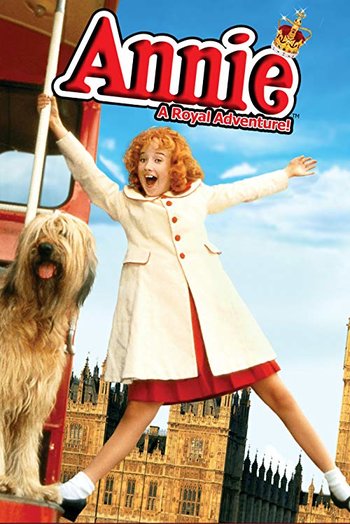 Annie: A Royal Adventure! is a Made-for-TV Movie that premiered on ABC in 1995. It is presumably a sequel to the 1982 film Annie (at least that's how IMDb recognizes it), but it has none of the same cast and is not a musical (unless you count a single reprise of "Tomorrow" at the end). The film has a Sequel Goes Foreign plot in which Annie, Warbucks, and company travel to England with Joan Collins playing a Rich Bitch villainess. Features Ian McDiarmid as an Absent-Minded Professor and a carrot-top Ashley Johnson as the title character, but Grace Farrell neither appears nor is mentioned.