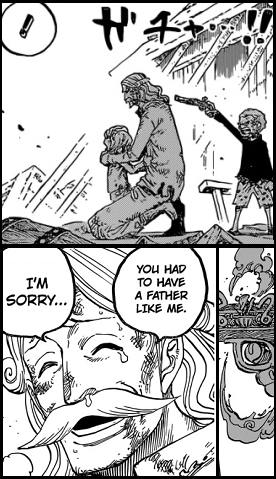 Children in times of peace bury their fathers, why wait?
"You see this? They call it the "Fangs of the Serpent". And this one was thrust into a father's heart by his very son! And my own daughter has fallen under this Thulsa Doom's spell. Is there a dagger such as this in her hand for me?"
— King Osric, Conan the Barbarian (1982)
Advertisement:

Fathers can be a terribly bothersome bunch. If you're the hero of an epic tale, half the time they turn out to be your worst enemy. If you're not such a hero, then maybe your father found his own way of pissing you off. Maybe he's set you up to marry the guy you hate, or he plans to hand over his title and fortune to his favorite general rather than you, his eldest son. Even if the title and fortune are intended for you, they're still not yours until the old fart is dead. Maybe he's got the woman you want (whether she's your real mother or not) or maybe he just doesn't appreciate the way you've been ogling your sister. Maybe your father genetically engineered you to be a Super Soldier or to power his super weapon and doesn't understand that you are so much more. Maybe you didn't even know it was him and he just got in your way. Maybe it was prophesied and You Can't Fight Fate. Maybe he beats you. Or your mom. Maybe all of these. In any case, your old man made a big mistake when he didn't off the offspring because his days are numbered. Daddy's goin down.

Patricide, the act of killing one's father, is one of the most serious crimes throughout history (it being one of the other things Oedipus is famous for). Such a taboo is therefore bound to be found in media. Often there is a degree of My God, What Have I Done? after the deed, reflecting exactly how horrible the crime is considered.

On the other hand, if you're not so very heroic, offing your dad may simply be the next big step in your long and promising political career. It could get you the woman of your dreams. And, lets face it, when you are the hero and your father is still alive, unless he's about to get kidnapped or murdered by the bad guy, then he probably is a horrible villain who deserves to die.

The killing of a parent is certainly very affecting and tells us a great deal about any character who would do it (and equally as much about characters who refuse to do it). When you're looking for some way of characterizing a hero as dark or causing him to grieve heavily, this is always a good trope. What could be considered odd, however, is how often patricide is portrayed in fiction as opposed to matricide. This is probably a combination of Oedipus Complex and Most Writers Are Male. Note that historically, the word Patricide was used as both a descriptive and personal noun. The act of killing one's father is patricide but the person who kills his father can also be called a Patricide.

Subtrope to Self-Made Orphan and Murder in the Family. Spear Counterpart to Matricide. Compare Archnemesis Dad, The Evil Prince and Oedipus Complex. Contrast You Killed My Father and Offing the Offspring. The more violent examples of Calling the Old Man Out may well involve this. May well be the life's goal of an Antagonistic Offspring and ultimate act of Betrayal by Offspring.

After spending years terrorizing and murdering the children of Elm Street, Freddy is finally put down by his daughter Maggie... until sequels bring him back again anyway.

After spending years terrorizing and murdering the children of Elm Street, Freddy is finally put down by his daughter Maggie... until sequels bring him back again anyway.