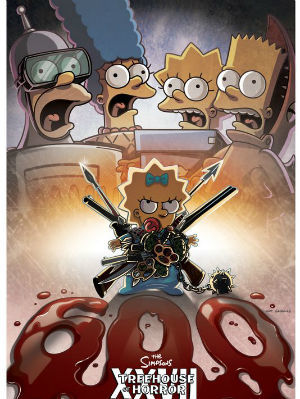 The episode opens with the Simpsons family buying Christmas trees early on Halloween, dressed in Halloween costumes, where they are locked in and ambushed by Sideshow Bob, the Leprechaun from "Treehouse of Horror XII", the ghost of Frank Grimes, and Kang, all seeking revenge on the family. Then, in a couch gag parodying Planet of the Apes, viewable with Google Cardboard for special content, the Simpson family are captured on a planet populated by living couches, before being rescued by their generic brown couch.

It contains the following segments: