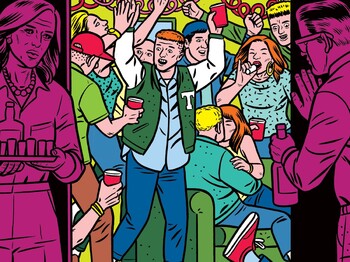 Honey, we corrupted the kids!
You know what I got for Christmas this year? It was a banner fuckin' year at the old Bender family! I got a carton of cigarettes. The old man grabbed me and said, "Hey! Smoke up Johnny!"
— Bender, The Breakfast Club
Advertisement:

In film and TV, the words "fun parent" are usually oxymoronic. After all, most parents are overbearing to some degree. It's their job. They're the ones who decide what is and isn't okay for a kid to do, so usually, they appear too controlling, overprotective or smothering. In some cases, however, the parent is the complete inverse of these tropes.

The Permissive Parents trope is when a parent or parents actively encourage things discouraged for those underaged. It is often Played for Laughs and includes situations like allowing children to drive without a license, but can also permit to dangerous and harmful things like encouraging them to have sex with someone significantly older. In this respect, examples can drastically range from fun or embarrassing to blatant abuse. The lighter side of the trope supports the idea that teens should be permitted the freedom to make their own decisions, and that parents should recognise these inclinations as valid. The parents who allow or support certain behaviours are thus praised by their kids as being cool or down-to-earth. They may even be exposing their children to these things so that they aren't intimidated by them later on in life. That doesn't imply the kids always grow up to value their parents' leniency, in some cases, they come to resent them for exposing them to harmful elements of society.

Usually, only one of the parents is allowing the behaviour, and behind the other parent's back. Typically the fun Disneyland Dad tries to give their child experiences they had at that age like letting their sons drink beers or smoke, in contrast to the concerned mother who tries to implement values and boundaries. It can also vary depending on the gender of the child. Often, the son is allowed certain privileges, perhaps because boys are viewed as more rebellious than girls. Another usage of the trope is when the parents aren't involved, but rather a relative like a Cool Uncle or aunt. Generally, the trope supports the conception that Naughty Is Good and that teens devoid of rebelliousness have less fun in their journey to adulthood. The parent might not always agree with these ethics, however. They could be trying to be laid-back, or they could be a pushover who is too scared to say no. A sister trope to this is the Radish Cure, where a parent encourages their child to do something inappropriate (such as smoke) to punish them. This is occasionally subverted so that the parents are actually permissive rather than punishing. The trope is also similar to Hands-Off Parenting, but that applies to parents who don't care about their kids' illicit behavior, opposed to actively encouraging it.

As this is Truth in Television, No Real Life Examples, Please!