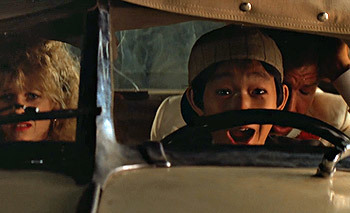 "For cryin' out loud, there's a kid driving the car!"
"Oh, isn't that cute? A baby driving a car! And look, there's a dog driving a bus!"
— Chief Wiggum, The Simpsons
Advertisement:

In most developed countries, people under a certain age, usually between 15 and 18, are barred from driving cars. In TV-land, children and younger teens may be seen driving if the plot demands it, even though doing so would be illegal or downright impossible in Real Life. Sometimes, they even drive more-or-less effectively despite having never done so before.

Sometimes, the adult characters are nowhere to be seen and the kids must drive somewhere to save the day. In these cases, expect I Know Mortal Kombat to come into play, with the kid turning out to be a Badass Driver due to their experience playing Racing Games or driving toy vehicles. This is obviously due to Rule of Cool and very much Artistic License – Cars- with particularly young children one wonders how their feet can even reach the pedals. This is often a form of Wish-Fulfillment for car-loving kid audiences. Other times, Surprisingly Realistic Outcome and Are You Sure You Can Drive This Thing? comes into play.

Other times, particularly with older kids and teens, the characters may drive for illicit pleasure, sometimes playing a Game of Chicken or joyriding stolen cars. Such characters are likely Delinquents.

In either case, if the kids are the protagonist this tends to happen in a climactic scene. Rarely is the car the kid's own, so there's usually a subplot about the characters trying to sneakily leave with or return the car. Chances are high that the car used is The Precious, Precious Car, particularly if the kid Drives Like Crazy as is often the case. May be justified by Minor with Fake I.D..

In historical, non-Western, or rural settings, where auto regulations are less strict and Free-Range Children is in effect, children driving cars or farm vehicles may be Truth in Television. In these cases, children driving can establish the setting as a simpler, more self-reliant time or establish the young driver as exceptionally mature. This can also be Played for Drama if the driving is a form of child labor.

Bart drives the Ferrini that was given to him by Mr Burns.

Bart drives the Ferrini that was given to him by Mr Burns.