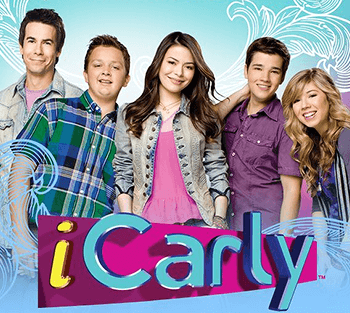 Just leave it all to me.note From left to right: Spencer, Gibby, Carly, Freddie, and Sam.
Freddie: In five, four, three, two...
Carly: I'm Carly!
Sam: And I'm Sam!
Carly and Sam: And this is...iCarly

iCarly (2007-2012) was a Nickelodeon teen sitcom created by Dan Schneider. Carly Shay (Miranda Cosgrove) is a young girl in her mid-teens living in Seattle with her big brother and guardian Spencer (Jerry Trainor), whose father has been deployed in the military for a decade or so.

After an accident where her comments on a Sadist Teacher's talent show made it onto a YouTube-like site, the positive internet reaction inspires her to make a creative web show with her two best friends, Samantha "Sam" Puckett (Jennette McCurdy) and Fredward "Freddie" Benson (Nathan Kress). Sam is a detention hall regular (and had been arrested several times) who craves meat, frequently mentions that her relatives are in prison or in parole, and keeps an array of dangerous tools in her backpack and locker. Freddie is an intelligent tech-savvy boy who works as the cameraman and keeps the iCarly site running. Along with his long-term teenage crush on Carly, he has an extremely overprotective and neurotic mother (Mary Scheer).

As part of the Nick Verse, the show is a Spiritual Successor to Drake & Josh being produced by the same people, and also including Miranda Cosgrove leading the cast as Carly with that show's Ensemble Dark Horse, Jerry "Crazy Steve" Trainor, as Spencer. The two shows could be assumed to be in a wider world setting, with various Schneider-verse references showing up like Galaxy Wars, Daka Shoes, the Gary Coleman Grill, Peruvian Puff Peppers, and the Parker-Nichols Hotel. It also had a Crossover episode iParty With Victorious (officially deemed as 3 iCarly episodes that are canon for both shows).

The sixth and final season began airing in the spring and over the summer of 2012. The original show ended its run in November, with the series finale iGoodbye airing on November 23. Since its conclusion, it has inspired the creation of two Spin Offs. The first is Sam & Cat (Cat being from Victorious) in a cross-over that was picked up for a first season in June 2013 before being cancelled in April 2014. The second involved Gibby but it was not picked up for a full series.

In December 2020, Paramount ordered a revival of the iCarly franchise for their online streaming service Paramount+ owned by ViacomCBS (which also owns Nick). The revival is a sequel that takes place 8 years later and is aimed at adult viewers, featuring more mature content that was off-limits in the originalnote Namely profanity, alcohol usage and overt sexual references. Miranda, Nathan and Jerry reprise their roles as Carly, Freddie and Spencer respectively while Jennette and Noah did not returnnote This is due to Jennette cutting ties with Nickelodeon following a salary dispute on Sam and Cat and recently quitting on-screen acting, now currently working as a writer and director while Noah has moved on to on-camera acting in other movies. leading their characters to be written out. The revival debuted on June 17, 2021.

Aside from a character sheet, other sections are listed on the header links as well as a Ho Yay/Les Yay page. Subjective and fandom-related tropes are under the YMMV link.

This is the page for the original series; for the 2021 revival, go to here.

Carly gets a B

Carly gets a B