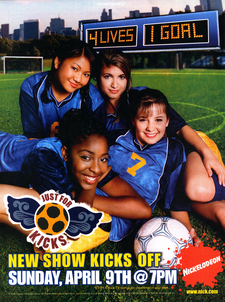 Just for Kicks was a live-action series that ran on Nickelodeon from April 9 – August 13, 2006. The series is about a group of girls on a soccer team set in New York City. Just for Kicks premiered in January 2006 on Nickelodeon UK, and in April 2006 on Nickelodeon in the United States. The series is produced by Brookwell McNamara Entertainment. It stared Francesca Catalano as Alexa D'Amico, Mallory Low as Winifred "Freddie" Costello, Katija Pevec as Lauren Zelmer, and Jessica Williams as Vida Atwood.

This show is one of Nickelodeon's most obscure series; it was buried in an awkward Sunday night slot, ran for only one season and was never reran again. It was deemed to be lost forever until May 2016, when the entire series was uploaded to YouTube in two parts. The only other thing the show is known for was launching Jessica Williams's career from that point and she would later be a notable The Daily Show correspondent.

Just for Kicks provides examples of: