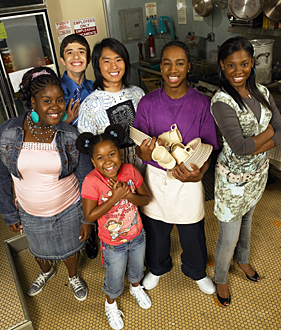 The season one cast.
Advertisement:

Nickelodeon Kid Com that stars Lil' JJ as Jordan Lewis. For those who do not know who Lil' JJ is, he was a kid who starred on the final season of All That. It ran from 2007-2008, but it was canceled as it was a victim of the 2007 WGA Writer's Strike. It was basically a slice-of-life show with Jordan, his little sister Monica or "Mo-mo", and mother living in Los Angeles with his grandfather and working at his diner. He also had two friends, Joaquin and Tony and his cousin Tangie and each episode had him running commentary on events.