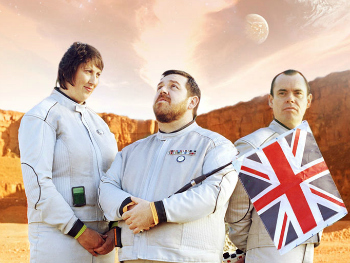 Teal, Henderson and York, about to make a new enemy for all of mankind.
"That thing is eating my crew!"
"Only the slow ones. She's picking them off, doing exactly what I'd do. I almost love her."
Henderson and York, A Gift From The Glish
Attention all crew: nutrition advice. Lager is not a meal in itself. Eat food with your lager.
Advertisement:

Set in the year 2151, the show follows the crew of HMS Camden Lock, a British "Wendover-class" ship headed by the eager, yet hopelessly naive Commander Michael Henderson. His crew is made up of the psychopathic Eduardo York, the shy and timid Chloe Teal, the neurotic Dave Vine, the disobedient Karl Jeffers and Robot Girl Sandstrom, who is in charge of flying the ship. They are charged with the mission of exploring new worlds and protecting Britain's interests in the galaxy, but because of how hilariously incompetent all of the characters are, they usually end up making their problems bigger until they go away.

The show frequently parodies its source material, lampshading and making fun of many tropes and conventions that are a part of Speculative Fiction.