Series / I Hear Your Voice 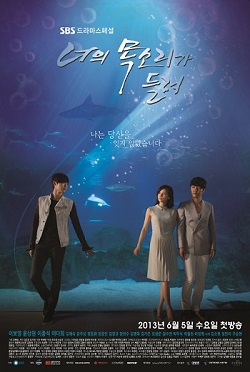 I Hear Your Voice (너의 목소리가 들려 / Neoui Moksoriga Deulryeo, I Can Hear Your Voice) is an 18 episode Korean Drama which aired on the network SBS in 2013, starring Lee Bo Young, Lee Jong Suk, and Yoon Sang Hyun.

As a young boy, Park Soo Ha (Lee Jong Suk) gains the ability to read minds after both he and his father are injured in a car crash while on a trip to the aquarium. The crash was in fact premeditated by the other driver Min Joong Gook, who bludgeons Soo Ha's father to death once he discovers that the crash didn't kill him. Soo Ha is saved from a similar fate when the teenage girl Jang Hye Sung (Lee Bo Young) interrupts the scene. Later, Hye Sung's testimony in court puts Min Joong Gook in jail for murder, and he swears revenge against Hye Sung and her family.

Ten years later, Hye Sung is now a very jaded and lazy lawyer who lands a position as a public defender along with the dorky Cha Kwan Woo (Yoon Sang Hyun). Soo Ha is now a high school senior, who still has his telepathic abilities and has been looking for Hye Sung for the past ten years. He is extremely disappointed to meet the dispassionate person Hye Sung has become, but with Min Joong Gook recently released from prison, that is the least of their worries...