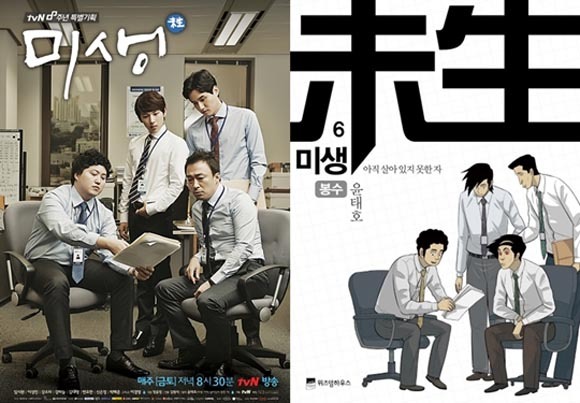 Incomplete Life a.k.a. Misaeng (미생, 未生) is a Korean drama aired on the cable network tVN in 2014. It's a slice of life story based on the wildly popular webtoon about office life and corporate culture in South Korea. The title refers to a concept from the strategy game Baduk (바둑) or Go where a player's piece could either "live" or "die" depending on the rest of the gameplay. The webtoon uses many detailed references to Baduk as a metaphor for life and its challenges as the main character, Jang Geu-Rae (Im Si-Wan), was once studying to become a professional Baduk player. However he failed to achieve his dream and now must somehow survive in a desk job alongside the rest of Korea's mass of corporate drones. The clueless intern is thrown into a team with the beleaguered Chief Oh (Lee Sung-Min) and his trusty sidekick Dong-Sik (Kim Dae-Myung), leading to conflict as the last thing the Chief needs is an incompetent kid to manage.