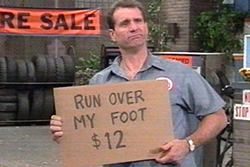 Al Bundy at work. It gets worse for him.

◊ And this isn’t even his main job.
Mr. Barber: Homecoming King in '91. They still got my picture hanging in the auditorium.
Stan: How's that working out for you?
— I Am Not Okay With This
Advertisement:

The Jaded Washout, the guy (or sometimes gal) who never made anything with their life.

Sure, they had promise back in high school, when they were the popular captain of the football team, or the ruling Alpha Bitch, but they clearly never planned for what would happen after graduation. Now that those Glory Days are long gone, they're middle-aged nobodys, running on what little social inertia they can still muster.

They're cynical, jaded, world-weary, disrespected by family and friends, underpaid in a humiliating dead-end job and struggling to achieve basic goals and recognition.

May often be heard complaining about not getting justly rewarded for all their effort, though closer inspection will show them to be a profoundly uninspired if not outright lazy worker and angrily resentful of those who've matured beyond them.

Compare with Unsympathetic Comedy Protagonist, This Loser Is You, I Coulda Been a Contender!, Future Loser, Hates the Job, Loves the Limelight, Loser Protagonist, White-Dwarf Starlet, and Former Child Star. Contrast Best Years of Your Life, Jaded Professional and Small Name, Big Ego.

With The Grizz being responsible for all of the eggs being gone, Bob became a failure as his tribe's chief food provider and ate himself into a downward spiral before The Grizz captured him.

With The Grizz being responsible for all of the eggs being gone, Bob became a failure as his tribe's chief food provider and ate himself into a downward spiral before The Grizz captured him.