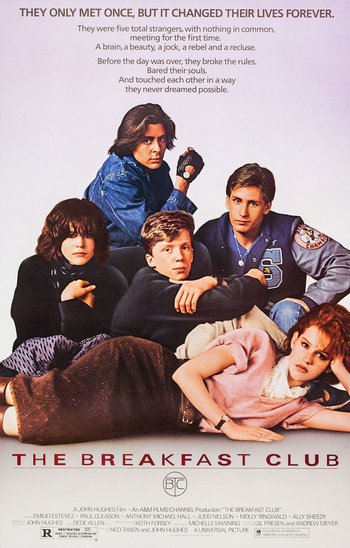 They only met once, but it changed their lives forever.
(If you're having trouble reading the rest, click here.)
They were five total strangers, with nothing in common,
meeting for the first time.
A brain, a beauty, a jock, a rebel and a recluse.

Before the day was over, they broke the rules.
Bared their souls.
And touched each other in a way
they never dreamed possible.
Brian Johnson: Dear Mr. Vernon: We accept the fact that we had to sacrifice a whole Saturday in detention for whatever it was we did wrong. But we think you're crazy to make us write an essay telling you who we think we are. You see us as you want to see us — in the simplest terms and the most convenient definitions. But what we found out is that each one of us is a brain...
Andrew Clark: ... and an athlete ...
Allison Reynolds: ... and a basketcase ...
Claire Standish: ... a princess ...
John Bender: ... and a criminal.
Brian Johnson: Does that answer your question? Sincerely yours, the Breakfast Club.
— Closing narration of the group's Epilogue Letter
Advertisement:

Of all the teen movies to come out of the 1980s, this was the one that ultimately defined the era and blazed the trail which, along with Sixteen Candles, would lead to the true formation of the Brat Pack. The Breakfast Club follows the journey of five teenagers who have all landed themselves a Saturday detention at their high school. During the course of the day, they are characterized by their cliques, harassed by angry vice principal Richard "Dick" Vernon, and aided by friendly school janitor Carl... all while coming to learn a little something about themselves, and each other.

Released in 1985, this dramedy film was written and directed by John Hughes, a legend in the teen movie genre. Its five principal actors — Molly Ringwald, Anthony Michael Hall, Emilio Estevez, Judd Nelson and Ally Sheedy — would become part of the "Brat Pack", a group of actors whose careers in the 1980s revolved around playing teens in popular movies with each other. This group also included Rob Lowe, Andrew McCarthy, and Demi Moore.