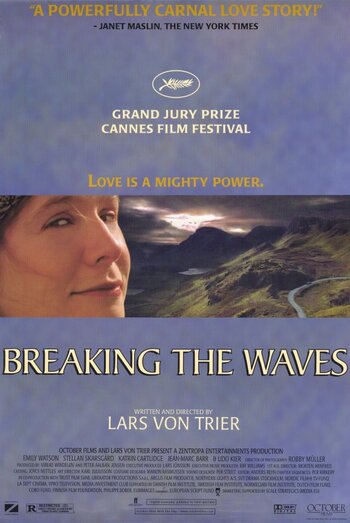 Breaking the Waves is a 1996 film written and directed by Lars von Trier, the first entry of his "Golden Hearts" Trilogy, and the beginning of a radical change in direction for the famously restless filmmaker. Set somewhere in the Highlands in the 1970's, the story concerns Bess McNeill (Emily Watson), a naive, borderline simple young woman, who marries Jan (Stellan Skarsgård), a Danish oil rig worker, despite the disapproval of her stern Church Elders. Bess enjoys a brief period of wedded bliss before Jan has to go back to the rig. After he's crippled in a freak accident, Bess becomes obsessed with saving him, even if it means alienating herself from everyone she's ever known. Everything culminates in one of the most unpredictable endings in the History of Film; think you know where it's going? Guess again.

Although not a Dogme '95 film, it makes use of many of those filmmaking principles. Director von Trier stated that the film's melodramatic plot would have been unbearable without the authenticity and gravity that the minimalist presentation provides.