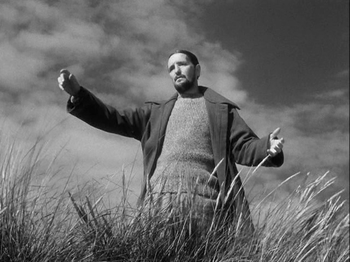 Ordet is a 1955 Danish film directed by Carl Theodor Dreyer.

It centers on two families in rural Denmark in 1925. The Borgens run their own farm. Patriarch Morten Borgen has three sons: Mikkel, who is married to the gentle Inger; Johannes, a former divinity student who has lost his mind and believes himself to be Jesus; and Anders, the youngest son who still lives at home. The Borgens practice a rather standard mainstream Christianity, although Mikkel has mostly lost his faith in God. Inger is heavily pregnant, and the family is hoping for a boy.

The other family in the story is the Petersens. Peter Petersen is a tailor. Peter's daughter Anne is in love with Anders and the young people wish to marry. Morten doesn't like the pairing but is outraged when he finds out that Peter has already rejected Anders as a match for his daughter. Morten and Peter have a confrontation, which is short-circuited when Inger goes into a difficult labor.