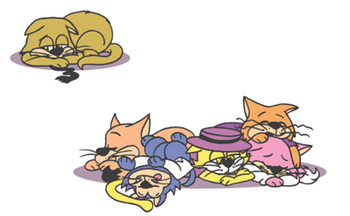 ''"If I got a buck for every moment I'm mothering you guys..."
— Top Cat
Advertisement:

is a Top Cat fanfiction by Samasim.

A horrible murder results in Top Cat’s gang losing a member, and Officer Dibble learns soon enough just how seriously Top Cat takes his role as leader. The story takes on a much Darker and Edgier tone than the 1960’s TV show.

This story is currently unfinished, but the tropes on this page will be updated, should it ever be completed.