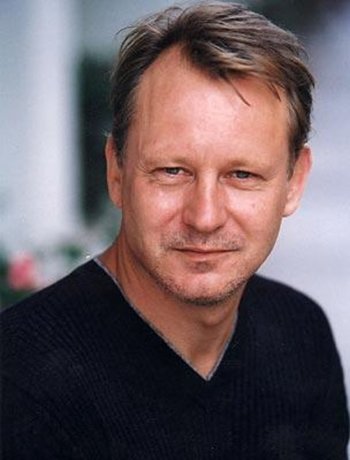 "I played a heap of snow in a school play. I was under a sheet, and crawled out when spring came. I often say I'll never reach the same artistic level again."
Advertisement:

Stellan John Skarsgård (born June 13, 1951 in Göteborg, Sweden) is a Swedish actor and the patriarch of a whole clan of actors.

He's had a distinguished career in European films, being a frequent collaborator of Lars von Trier among others. In Hollywood, he's known for playing supporting character parts and often being the best thing in some otherwise crappy or underwhelming movies.

Skarsgård is a father of eight, including Alexander, Gustaf, Bill and Valter, who all became actors. Despite the similar name and common misconception, however, there is no relation to the actor Peter Sarsgaard.

He also gets mistaken for Liam Neeson quite a bit.

Films and series he has appeared in include: