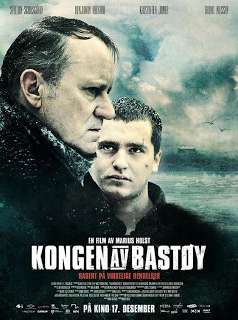 Left: the Governor. Right: The king.
"Here, I'm your captain. This island is my ship. The housefathers are my mates. . . Our goal, and your goal, is to find an honorable, humble, useful Christian boy in here. Shape and polish him. And if we don't find him. . . you'll stay here."
— The Governor
Advertisement:

King of Devil's Island (Norwegian title: Kongen av Bastøy) is a 2010 film by Marius Holst, which dramatises the events surrounding a 1915 inmates' revolt at Bastøy Reform School, an island prison for teenage boys. It is Very Loosely Based on a True Story.

The mutinous seventeen-year-old Erling and the naive Ivar are the newest inmates of Bastøy, the desolate island reform school ruled by a disciplinarian Governor (Stellan Skarsgård). While Erling immediately begins to plot his escape, against the advice of his barrack leader Olav, Ivar falls prey to the abusive Housefather Bråthen. When the school attempts to bury the crime, one boy's revolt leads to a riot. . . and the arrival of the Norwegian army.

The official site (in Norwegian, of course) is www.bastoy.no