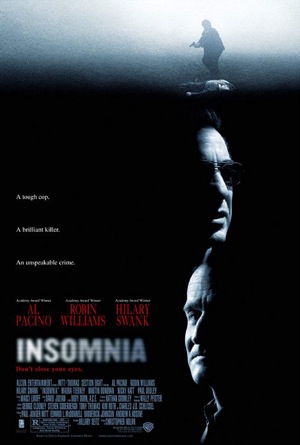 Insomnia is a 1997 Norwegian Psychological Thriller film directed by Erik Skjoldbjærg and starring Stellan Skarsgård, and a 2002 American remake directed by Christopher Nolan and starring Al Pacino, Robin Williams, and Hilary Swank. Both films were critical darlings, and the remake, in particular, became a box office hit.

"White Night" (or "The Midnight Sun") is a phenomenon in which the sun is still visible after midnight in settlements near the Arctic Circle — in some cases, it won't set for months at a time. It is during this season when the savagely beaten body of a local teenage girl is found in a remote Northern town (Tromsø, Norway in the original and Nightmute, Alaska in the remake). The vicious nature of the killing and the meticulous manner in which the body was cleaned has confounded the local police, who soon realize that they need help.

Skarsgård (Pacino as in the remake) plays a jaded, disgraced big-city police detective (Kripos and LAPD respectively) who is flown in together with his partner, to bring the case to a swift end through their wealth of experience with violent crime.

However, due to the stress of the investigation, combined with an extreme case of insomnia brought on by the White Nights, he ends up committing a fatal error when he tries to hunt down the killer - a botch-up that he, overwhelmed by his sleepless frenzy, attempts to cover up.

Soon, the lines between fantasy and reality start to blur, leaving him to question the sins of his past and the bleak prospect of his future. Little does he know that the man he's been hunting is watching him closely, and one tragic mistake is all the killer will need to exploit the detective's weakness...

No relation to the Stephen King novel Insomnia, or the gaming/philosophy website, or the Legend of Zelda fanfic Insomnia.