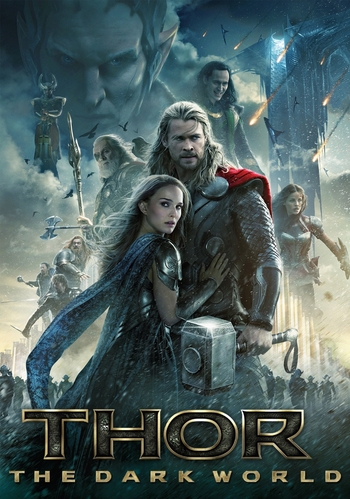 "I'll find a way to save us all."
"Some believe that before the universe, there was nothing. They're wrong. There was darkness... and it has survived."
— Allfather Odin Borson
Advertisement:

Thor: The Dark World is the 2013 sequel to Thor and the eighth film in the Marvel Cinematic Universe and the second instalment of Phase 2, directed by Alan Taylor of Game of Thrones fame.

Following an assault on Asgard by Malekith the Accursed and his dark forces, The Mighty Thor teams up with his disgraced brother Loki, still imprisoned for his actions in The Avengers, and a possessed Jane Foster to breach the eponymous Dark World (a.k.a. Svartalfheim) and take the fight to their enemy.

Stars Chris Hemsworth as Thor, Tom Hiddleston as Loki, Natalie Portman as Jane Foster, Anthony Hopkins as Odin and Christopher Eccleston as Malekith the Accursed. Appeared in U.S. theaters with animated short Room on the Broom.

open/close all folders
Tropes A to C
Tropes D to K
Tropes L to P
Advertisement:
Tropes R to Z
"One down. Five to go."
Feedback

Example of:
Superman Stays Out of Gotham