Feeling Oppressed by Their Existence 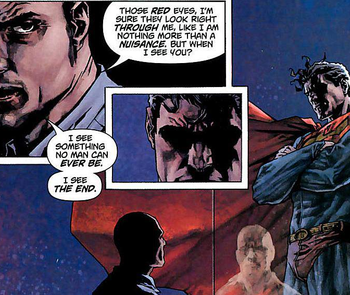 Copen: Now, you'll pay for your crimes!
Gunvolt: Seriously...? "Crimes"?!
Copen: Our human world is infested with freaks, fiends, inhuman terrors... That is exactly what all of you Adepts are. Your mere existence in our world is a crime.
— Azure Striker Gunvolt
Advertisement:

Bob is not free, or so he thinks. On the contrary, he considers himself to be very oppressed. Because there is a certain kind of people that he doesn't like, and they... exist. He's not free to kill them or otherwise remove them, thus he's not free at all.

At best, this is Played for Laughs, often running on Rule of Creepy. (In this version, the "oppression" may come in the form of I Have Boobs, You Must Obey! and be portrayed as real.) At worst, it may make the character come across as a bigoted monster.

In either case, death threats or "liberation" is optional. Whining about how the open existence of other people in itself infringes on one's freedom is enough. Note that it does not count to claim that the other group may pose an actual threat in the future.

An Evil Overlord of the Manipulative Bastard kind may use this trope as a strategy to cling to power, directing his subjects' yearning for freedom into a racist yearning for "liberation" from the existence of another ethnic group.

Far more often, this is expressed as a stock complaint of hyperpatriotism or chauvinism or just plain bigotry in general. For example, "foreigners" are taking over one's country (or community, or whatever) and are going to outbreed or even replace the native people—and, worst of all, just might be plotting to turn everyone else into them, whether genetically or just culturally.note  Some anti-immigrant partisans have sardonically noted that it was (and is) okay for American Indians to feel this way about the European settlers, in part because their fears happened to be well-founded.

Sometimes done by Racist Grandmas, Heteronormative Crusaders, or Troubled Sympathetic Bigots. The latter may have homophobia or similar as an actual clinical phobia rather than just categorism. See also White Man's Burden, which suggests being "oppressed" by another group's weakness or neediness. May overlap with Stop Being Stereotypical if that trope is used as an excuse—if the "oppressee" argues that the stereotypes are true, the group is making him hate them with their obnoxious behavior, and that therefore the group is deserving of any mistreatment they get. (An anti-heroic version of this character might like some members of the group if they "don't act like the stereotype.")

When this destructive hatred is not focused solely on one group but every human being, it's Kill All Humans. The next step up is the Absolute Xenophobe, who wants to destroy all other sentient life not part of their own group, human or otherwise. The final one is the Omnicidal Maniac, who wants to kill and destroy literally everything.

And while this belief is sadly very much Truth in Television, obviously No Real Life Examples, Please!