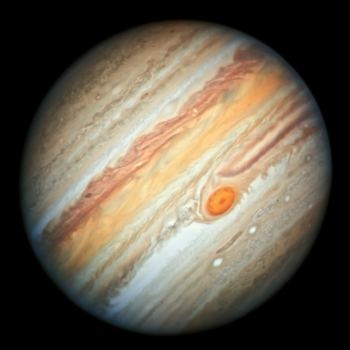 King of the Planets
Profile
"Jupiter instead cooled down below the threshold for fusion, but it maintained enough heat and mass and pressure to cram atoms very close together, to the point they stop behaving like the atoms we recognize on earth. Inside Jupiter, they enter a limbo of possibility between chemical and nuclear reactions, where planet-sized diamonds and oily hydrogen metal seem plausible."
— Sam Kean
Advertisement:

Also known as Earth's Big Brother. The planet has been known to Earth observers since antiquity, as it is clearly visible in the night sky. It is the second brightest of the five traditionally visible planets; since Venus is only visible during morning and evening, this leaves Jupiter as the brightest planet for the bulk of the night, which is why it is traditionally named after the king of the gods.

The biggest gas giant in the Solar System, massing over 300 times more than Earth. Jupiter's mass is so great as to single-handedly pull the center of gravity for the entire Solar System into the empty space beyond the Sun's surface. It's mostly hydrogen and helium, although various other compounds provide its colorful bands and storms. Its most prominent surface feature is called the Great Red Spot, in some works a source of Nightmare Fuel for the colonists based on Jupiter's moons due to its eye-like appearance. It's an anticyclone, a whirling storm 3 times as big across as the Earth that according to recent data

extends relatively deep into Jupiter. Much of the energy for its weather appears to come from the very slow contraction of the planet.

The surface gravitynote (which is defined as the force of gravity at its cloud tops, as while Jupiter does have a solid rocky core, it is poorly understood and not easily observable) on Jupiter is 2.53 g, which is 2.5x stronger than Earth. Jupiter has by far the strongest surface gravity out of any planet in the Solar System with only the Sun giving it a run for its money. If you could stand on Jupiter, it would be the equivalent of being morbidly obese on Earth but without the body fat. Not exactly crushing but still unpleasant to move around in the long run.

It's thought that below the visible clouds, whose depth is of around just 50 kilometers and where exist thunderstorms far more powerful than anything Earth's atmosphere can bring on, the atmosphere as both pressure and temperature increase transitions smoothly into a sort of global ocean of metallic hydrogen

(see quote that begins this article). Originally, it was thought that Jupiter has a solid core of rock and ice at its center, but later analysis from the Juno spacecraft revealed that Jupiter has a very diffuse, fuzzy core that's mixed in with the metallic hydrogen mantle, making it seem like Jupiter is liquid all the way down. Whether this holds true for the other gas giants is yet to be determined, but one possible theory is that Jupiter's original solid core was disrupted by a giant impact in the past.

Jupiter's orbit isn't quite circular; at perihelion, it's less than 5 A.U.note A.U. stands for Astronomical Unit, the average distance between the Earth and the Sun from the Sun, but at aphelion it's nearly 5.5 A.U. away from the Sun. One complete orbit takes almost 12 years. Despite its great size, Jupiter spins very rapidly on its axis, going all the way around in under 10 hours; this high rate of rotation causes the planet to bulge visibly at its equator, as though it were trying to fling some of its material off into space.

Jupiter's magnetic field is much stronger than Earth's, and its magnetosphere is larger than the Sun. How big? If it were visible, it would be larger than the Moon from our perspective — and it reaches Saturn. Unlike in Earth's magnetosphere, where most of the energy and material comes from the solar wind, Jupiter's magnetosphere gets most of its material from Io's volcanoes, which release gas that is stripped off the moon and ionized, and energized by Jupiter's rotation. Jupiter's magnetosphere is home to extremely strong radiation belts, a plasma torus following the orbit of Io, and radio emissions. The aurorae of Jupiter are unusual in being powered more by the planet's rotation (through the magnetosphere plasma) than by solar wind. Jupiter's moons produce their own "auroral spots" on Jupiter, by interacting with the magnetosphere and sending currents into the atmosphere. Said belts are also very nasty for the electronics of the spacecrafts that pass through themnote Explaining why the Juno probe, currently orbiting Jupiter, has all its electronics within a large titanium box

(and especially to future human missions to Jupiter as they bathe the rings and moons up to Ganymede's orbit in more than enough radiation to kill a human — several times from Europa inwards).

Jupiter is believed to be the first of the planets to form from the Sun’s accretion disk, and along with the other giant planets will likely remain with the Sun long into its future, given that it orbits at a distance well out of the way of the Sun’s outer edges when it will enter its red giant phase. Jupiter’s relative head start is believed to have come about because its formation occurred on or around the young solar system’s ‘snow line’, where water and other volatiles could condense into ice and dust without being evaporated by the infant sun. This early formation allowed Jupiter free reign to gather more material and grow into its present size, but led to an event in which the planet almost dashed the chances of Earth (and by extension, humanity) from ever existing…

At a time after its formation, Jupiter embarked on a rampage through the inner solar system, hypothesized as part of the Grand Tack Hypothesis

, migrating inward from 3.5 AU to 1.5 AU, before being pulled back to its present location thanks to an orbital resonance with Saturn. Jupiter's immense gravity probably stunted Mars by starving it of material when Jupiter migrated towards the Sun, when it should have gotten as big as Earth and Venus, and when it migrated back out thanks to Saturn, kept another planet from forming where the main asteroid belt is now.note One application of the Grand Tack theory is that this missing planet is the dwarf planet Ceres, and that as Jupiter passed close to its position, it plundered most of the material in Ceres' accretion disk, preventing its further development into a full-sized planet. This migration also pushed Uranus and Neptune into their distant orbits, along with making them switch places (Uranus was originally the outermost planet). There's a strong possibility that this also ejected a planet from the Solar System, there's evidencenote a lithium spot on the Sun another gas giant plunged into the Sunnote The recent Grand Tack Theory also proposes that after migrating inward to Mars' distance to the Sun (1.5 A. U.), Jupiter messed with both the asteroid belt and the young rocky planets forming there, with the destinies of each of them forever tied to Jupiter's rampage after it migrated out to its present orbit under the effects of Saturn's pull, and a growing body of evidencenote the bizarre orbital configurations of certain trans-Neptunian objects, some of which stumped astronomers for years that yet another ice giant, or at least the solid object that would have otherwise become the core of an ice giant, was launched into the outer solar system beyond the Kuiper Belt. This is also why there's no "super-Earths" in the Solar System, despite them being far more common in alien solar systems than Earth-sized bodies.note As far as we know; Earth-sized planets are much harder to detect. But many of the solar systems that have been analyzed so far have configurations of larger planets that would render an Earth-sized planet impossible on account to how close the larger planets are to their stars. That's not all. The Grand Tack Theory also shows that Jupiter pushed icy material from the outer Solar System into the inner, giving Earth a massive amount of water, a lot of it on the surface, but most of it located 300 miles under the crust. Venus and Mars also received that gift, but they were unable to keep their water for various reasons.

Jupiter is also well placed to deflect those nasty comets and asteroids away from us in the inner Solar System. It definitely took one for the team when Comet Shoemaker-Levy 9 came calling in 1994. However, its influence on comets is a two-edged sword — some comets, which otherwise would have made a single pass through the inner Solar System and headed back out into deep space never to be seen again, were instead deflected by Jupiter into short-period Solar orbits that pass through the inner Solar System over and over. (Comet Halley probably had this happen to it twice.) Regular dark impact spots have indicated that Jupiter probably gets hit by a large comet or asteroid as often as once every few years, having had recorded asteroid strikes in 2009, 2010, and 2012. (As if on cue, another asteroid hit Jupiter

When the Voyager space probes passed by Jupiter in The '70s, they discovered that the planet had rings, similar to the rings of Saturn or Uranus. These rings are invisible from the Earth, since the ring plane is tilted edge-on to the ecliptic. The ring system is also far less spectacular than the rings of Saturn; Jupiter has 4 rings, but Saturn has thousands.

Scientists now believe that gas giants in wide orbits like our Jupiter are actually rare, and that most gas giants eventually become "hot Jupiters" orbiting very close to their suns. Our own Jupiter would have been one as well had Saturn not existed — and had Jupiter migrated closer and closer to the Sun, it would have wiped out the inner planets with its gravity (and as explained in the third note, this could have happened).note Even so it will go "hot Jupiter" once the Sun becomes a red giant, but due to the Sun's greatly increased luminosity and not because it will move much closer to the Daystar.

The planet harbors many, many moons, some of which are listed in their own article: The Moons of Jupiter.