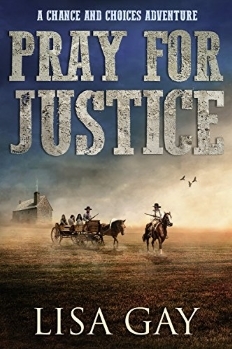 Book One, Pray For Justice

Chance and Choices Adventures is a Christian Western novel series by Elisabeth Gay. Set in early 19th century Arkansas, at the time a state on the western frontier, the series aims to explore the concepts of fate and destiny. As the title says, sometimes it's chance, sometimes it's choice, and sometimes it's God's will.

The series follows the lives of the Williams sisters - Ann, Stephanie, and Sally. Their peaceful lives are turned upside down when a half-Native American man named Noah Swift Hawk arrives in town and is attacked by local ne'er-do-well Hank Butterfield. Hank is killed by the townsfolk but Noah is grievously injured in the conflict. The Williams sisters agree to take care of Noah, unwittingly drawing the wrath of the entire Butterfield Gang.

There are currently seven books in the series. They are:

The entire series can be found through its website

Tropes seen in the Chance and Choices Adventures series include: