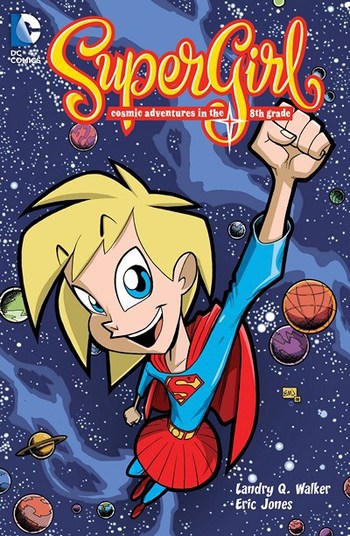 Supergirl: Cosmic Adventures in the 8th Grade is a six-issue limited series published under DC's Johnny DC imprint in 2009, with story by Landry Q. Walker and art by Eric Jones. The series targets younger readers and does not take place within mainstream continuity.

A space rocket ship crash-lands on Metropolis. Fortunately, it happens to land on top of Lex Luthor who is in the midst of a battle with Superman. A young Kryptonian girl called Kara Zor-El emerges from the rocket slightly dazed, and discovers that she is quickly developing superhuman powers, which leads to very awkward situations.

Superman quickly takes her to a quieter place, and after things settle down, she introduces herself to her cousin. She tells him -after Superman presses her for a more truthful story- she had a spat with her parents and hid inside the rocket ship. Her arrival on Earth was purely accidental. She wants to go back home to the moon Argo City, but Superman doesn't have the means to send her back. Instead, he provides her with the cover identity of Linda Lee and enrolls her in public school as he trains her to become Supergirl.

Unfortunately Kara has great difficulty adapting to Earth culture. It doesn’t help she feels very alone, her teachers are twisted, her fellow students constantly laugh at her seeming ineptitude, her Alpha Bitch Evil Twin wants to make her life Hell, her best friend is a Luthor (ergo, self-centered, short-tempered and unhinged), her powers work stupidly and she is the universe’s biggest weirdness magnet.