The Joy of First Flight 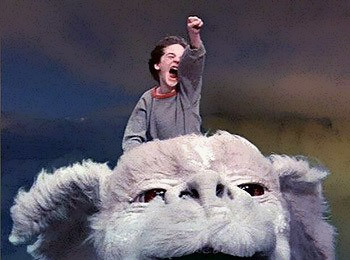 Outside of small, "ultralight" powered aircraft,note  which have gotten very small; airworthy craft in the US can weigh less than 250 pounds man has yet to unlock the power of personal flight. It may never do so, and that rubs a lot of people the wrong way. Flight is one of mankind's greatest fantasies; as such, when a human in a fantasy or science fiction work learns how to fly, it's not just treated as another normal occurrence, but is given great fanfare and spectacle.

Flying, especially for the first time, is seen as empowering and cathartic. Often, the first flight will be savored by characters and given a lot of screen time and maybe even a song—subsequent flights just don't capture the magic of first taking off.

Possibly due to their place as an emotional high point, they are prone to getting interrupted.

Standard trope for any character becoming the Dragon Rider. See also Flight Is the Final Power.