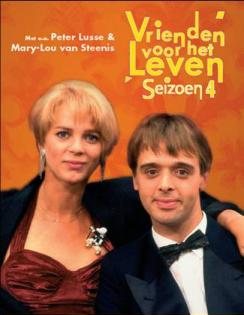 Ellen and Eddie
Vrienden voor het leven (Friends for life) was a Dutch sitcom that aired in the early half of the 1990’s.
Advertisement:

The series, which is a Dutch remake of the British series The Two of Us, focuses on the lives of young adults Eddie and Ellen. In the first episodes they are just in love and living together, but later they marry and even have a son. Other important characters are Eddie’s relatives like his old fashioned mother, his absent minded father and his grandfather, and his coworker Paul.