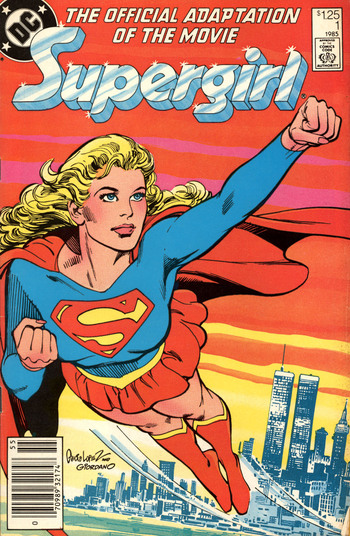 Supergirl Movie Special is the official comic adaptation of the 1984 movie. Published in October 1984 (with a cover date of February, 1985), it was written by Joey Cavalieri and penciled, inked and colored by Gray Morrow. Jose Luis Garcia Lopez provided the cover art.

Kara Zor-El, Superman's kid cousin, is one of the denizens of Argo, a Kryptonian city which survived its planet's holocaust and now drifts aimlessly around the space. One day, Kara's friend and mentor Zaltar "borrows" the Omegahedron, a matter-transmuting artifact which keeps Argo's life support systems running, so he can create and see a real organic tree with his own eyes before leaving for Earth. However, Alura walks into his den as he is showing Kara the Omegahedron, and Zaltar is forced to lend his matterwand to Kara to keep both women distracted as he hides the stolen device hurriedly.

Unfortunately, Kara playing with the wand accidentally opens a breach into the forcefield surrounding Argo City, and the Omegahedron is sucked into the space. Blaming herself for the loss, Kara "borrows" Zaltar's space pod and sets out on a quest in search of the device before her city run out or power.

Her quest leads her to the planet which her cousin calls home, where an ambitious and powerful witch called Selena has found the Omegahedron.