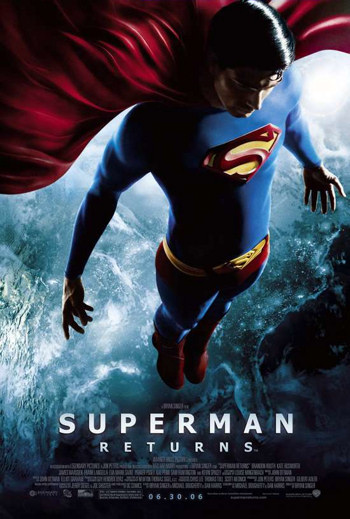 "Even though you have been raised as a human being, you are not one of them. They can be a great people, Kal-El, they wish to be. They only lack the light to show the way. For this reason, and above all, their capacity for good, I have sent them you, my only son."
— Jor-El, the film's teaser trailer

By 2006, DC Comics was in a period of success. Smallville was in its sixth season keeping the Superman franchise alive on TV, Justice League was keeping the DC Animated Universe alive, and Batman Begins from only a year before had reinvigorated the Batman film franchise. Taking advantage of this popularity, it was decided that after nineteen years in limbo, the Superman film franchise should be revived as well. Bryan Singer, who directed the first two of the X-Men Film Series, crafted Returns as both a sequel and an homage to Superman: The Movie and Superman II — while also ignoring Superman III, Superman IV, and (probably) Supergirl.

Set five years after the events of Superman II, Superman (Brandon Routh) returns to Earth after leaving to search for remnants of Krypton in deep space; in the time between Superman's departure and return, Lois Lane (Kate Bosworth) won a Pulitzer Prize for the article "Why the World Doesn't Need Superman" (ouch!), and the world has moved on in his absence. Superman has to deal with the ambivalent reaction toward his return, work on mending his relationship with Lois, and foil the latest deranged scheme by a resurfacing Lex Luthor (Kevin Spacey).

Unfortunately, the film failed to capture the same audience as Batman Begins, and bombed; it would be another seven years before Superman returned to the big screen with Man of Steel in 2013, introducing Henry Cavill in the role and starting the DC Extended Universe.

Brandon Routh reprised the role of Superman in the Arrowverse's Crisis Crossover adaptation of Crisis on Infinite Earths, appearing alongside his regular role of Ray Palmer / The Atom from Legends of Tomorrow. This incarnation and suit

◊ was based on Kingdom Come, but at the same time remained the same character in the film, meaning the same one that was played by Christopher Reeve.