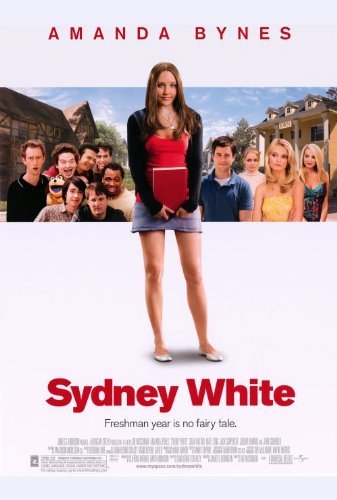 Motherless girl Sydney White, raised by her father and a group of construction workers, goes off to college with plans of joining her mother's sorority, Kappa Phi Nu.

She quickly makes friends with the other Legacy, ditzy blond Southern Belle Dinky, and meets the President of Kappa's brother frat, Tyler Prince - who just happens to be the Kappa president Rachel Witchburn's ex. He flirts with her, but Rachel sees and immediately dislikes her.

Sydney is allowed a bid due to the fact her mother was a Kappa, but things do not go well for her. Despite bonding with her fellow potentials, Rachel hates her, she isn't rich, and Tyler has developed quite an interest in her, much to Rachel's disapproval. On the first night of hazing, she brings an inappropriate date to date dash: hypochondriac, allergic, Vortex-dwelling Lenny. She likes him, but Rachel forces her to ditch him and sticks him with the check for some thirty people.

Everything blows up when, at the dance in the dress Rachel gave her, Sydney is kicked out and told, 'You will never be a Kappa.'. Homeless and feeling she has failed her mother, she goes out into the rain, sobbing on the street with her bags in front of the Vortex, so named for sucking in losers — a rundown, former student overflow housing on Greek row. Rachel wants the Vortex torn down for her country-club gym for greeks. Lenny and Spanky, two of the seven dorks, offer her a place to stay.

In the morning, Sydney notices just how run down the place is and suggests some repairs. Grumpy Gurkin, writer of People'sPunisher.com, rants about the control Rachel and the rest of the Greek oppression have on campus, making it impossible to get repairs. Later that day, she spots sign-up sheets for student council, sparking their Freedom to the Seventh Power party, stepping out of her own box, and a showdown debate with Rachel.