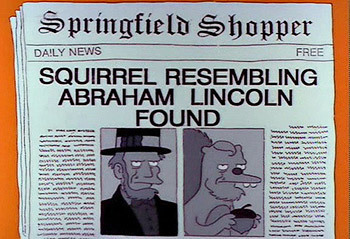 Stop the presses!note The squirrel was later assassinated.
"Russia and the United States are at war. Missiles have been fired by both sides. Washington and Moscow are in flames. Details on these and other stories in just a moment, but first, this word about hair care."
— George Carlin
Advertisement:

Exhibited by entire newspaper editing teams at our heroes' hometown papers, the Worst News Judgment Ever gets relatively mundane news stories placed in prominent locations (i.e., A1, above the fold, bannered across five or six columns, and with an overblown mug shot). Our heroes have an easy time finding whatever they happen to be looking for, usually seeing the paper in a vending machine. With that sort of placement, you don't even need to buy the paper — it's all in the giant-print headline.

Usually, the news judgment is so wildly overblown as to cause disconnection from the audience; you will rarely, if ever, see a Lampshade Hanging pointing out this ridiculous fallacy.

While improbable in the real world, the overplayed story in question usually provides our protagonists with a Red Herring.

On the other hand, if the main headline is earth-shattering enough, one may start to wonder why there are any other articles on the front page at all. When the main headline reads "Extinction of Humanity Imminent", then how in the heck is "New Petitions Against Tax"

In a comedy or an old movie, will manifest itself at the end of a Spinning Paper montage.

There is also an inverted version of this trope that is usually used intentionally for ironic purposes: an important story (often describing the events that occurred in the movie we've just seen) is shown stuck in a corner on the newspaper, while a vapid story (such as a celebrity scandal) sucks up the headline space. The paper is showing terrible judgement by emphasizing the wrong story. (Given, among other examples, the protest of MSNBC's Mika Brzezinski over having to lead with a Paris Hilton story when there were several more serious stories worthy of attention, this could be considered Truth in Television.)

This variant is almost always used as a commentary on society's preoccupation with meaningless gossip, but it is sometimes used to show that the world has virtually ignored a story that would have changed everything (such as proof of the existence of aliens, vampires, or similar). In this case, it's not so much bad judgement — the paper would have no way of knowing that the freak meteor shower was the remains of a destroyed alien invasion fleet — but probably still counts as an example of this trope because the audience knows that the small story is actually of critical importance.

Sometimes this will be used as a joke; the "main", plot-important story is used as the main headline, with an even more important story stuck in a corner. For example, in The Trapped Trilogy, one newspaper main headline was about a serial killer escaping. A smaller one was the second coming of Jesus Christ. Some times you'll find comments about the lack of meaningful other news as a joke.

Often used to demonstrate that Old Media Are Evil. Likely to take place in school newspapers. Compare Coincidental Broadcast when used to relay plot-relevant information, and Yet Another Baby Panda when news broadcasts conclude with a fluffy piece. See also Local Angle. Kent Brockman News often features this. Contrast If It Bleeds, It Leads, where the only important info that gets reported to death is the most miserable. Proportional Article Importance is when a reader of the newspaper misjudges the importance of an article.

What kickstarts the whole plot is Kermit and Fozzie writing a front page article about identical twins (them) joining the newspaper staff. All the while they completely miss the jewel robbery literally going on right behind them. Their editor is so furious, he nearly fires them over it.

What kickstarts the whole plot is Kermit and Fozzie writing a front page article about identical twins (them) joining the newspaper staff. All the while they completely miss the jewel robbery literally going on right behind them. Their editor is so furious, he nearly fires them over it.